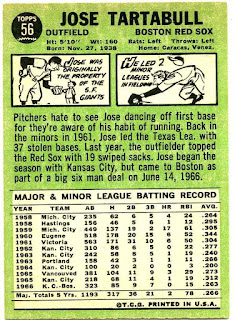 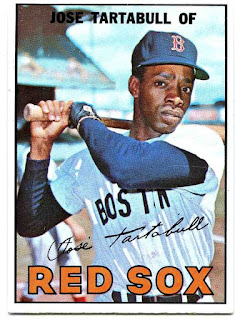 Up next is someone who I grew up thinking of as just Danny Tartabull's father. The New York Yankees slipped into irrelevancy in 1989 and fell even further in 1990 with Steinbrenner's temporary ban/suspension/agreement for his involvement in the Spira affair centered on Dave Winfield. The Yankees were slowly developing young talent but still were fishing in free agency for players. After replacing Winfield with Barfield didn't work out, they tried Danny Tartabull and he did for 4 strong years. His production numbers remained respectable though his batting average dropped from its peak. In alot of ways, Danny Tartabull is the forgotten New York Yankee. The team was becoming relevant but were in the shadow of the Toronto Blue Jays. The '94 strike year also diminished the Yankees on that team that were not around in '96 for their championship run. Luis Polonia, Steve Farr, Steve Howe, Mike Stanley, Matt Nokes, and Danny Tartabull aren't names as readily remembered by Yankee fans.

Jose Tartabull wasn't the power hitter his son turned out to be , in fact he has two home runs in his career. Tartabull however was a gifted base stealer and a valuable utility player in the outfield. He went on to see action in all 7 World Series games in 1967. His pro career began when he was 19 in the Giants farm system and ended in the Athletic's farm system when he was 33.

I like the look of this card. It's a picture taken in Yankee stadium, Tartabull in this pose takes up alot of space within the borders, and the orange lettering compliments the look of the Red Sox uniform well in this setting. The cards with Sox players photographed in Spring Training with the yellowish looking grass aren't as striking to the eye. It's the grass that does it I think.
Posted by Vonnoosh at 8:28 AM